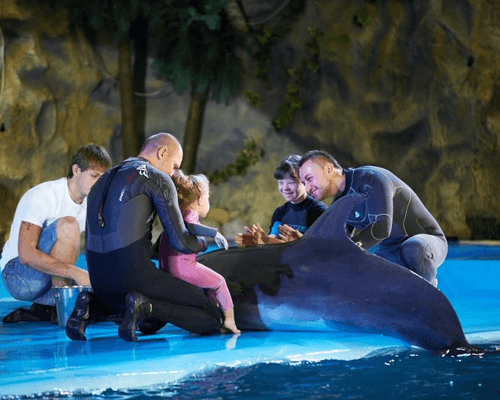 Autism is a complex set of deviations in the cognitive and psychosocial sphere, in which the course of certain mental processes is distorted. Early infantile autism (EIA) manifests itself already in infancy and is characterized by a lack of basic emotional reactions in the child – he or she does not smile, does not show emotions towards his or her parents, it is difficult to establish eye contact with him or her. As the child grows, new symptoms appear:

Diagnosis of early infantile autism occurs at the age of 2 to 5 years. Even though modern medicine considers autism an incurable disease, earlier initiation of treatment and corrective therapy can bring certain successes in the struggling against the disease. Complex treatment of early infantile autism presupposes both medication — prescribing sedatives, anticonvulsants, psychostimulants, and physiotherapy, classes with a child psychologist, speech therapist, special-needs expert. As auxiliary correction tools in autism the following methods are applied:

Dolphin therapy for children with autism: a therapeutic game 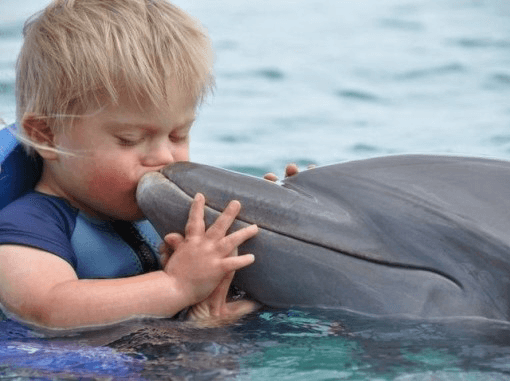 Dolphin therapy for children with autism is one of the most effective auxiliary methods of correction. Dolphins are considered to be ones of the smartest mammals on our planet, with unique abilities for inter-species communication. By nature, they are endowed with a positive, inquisitive character and absolutely safe for humans. Principle of dolphin therapy is based on the communication of the child with the dolphin in an arbitrary game form, under the supervision of specialists and parents (in some cases). The ability of dolphins to change behavior depending on the psycho-emotional state of a small patient allows one to work with the most complex manifestations of autism and receive positive results.

Given the characteristics of the psyche of autists, the child's familiarity with dolphins should begin before visiting the dolphinarium. Parents should tell the child about dolphins, watch some video materials or cognitive programs along with him or her. This will minimize the child’s possible worries when getting into an unfamiliar environment and it will be easier to begin the process of therapy.

The positive influence of dolphin therapy in the treatment of early infantile autism is confirmed not only by parents’ responses, but also by doctors – child psychologists and neurologists, special-needs experts, etc., who observed children before and after dolphin therapy. Using it, you can achieve the following results:

The physical load, received in the course of class, serves for development of gross motor skills of the child, improves ability to navigate in space.

With all the specifics of development, autistic children can be distinguished by exceptional abilities to count, music, memorization. Most often, these abilities are manifested in children with Asperger’s syndrome.

Asperger syndrome is characterized by the absence of delay in speech development and intellectual activity in children, but there are “failures” of gross and fine motor skills, stereotyped behavior and difficulties with social interaction.

In addition, as well as EIA, Asperger’s syndrome treatment requires a comprehensive approach with the use of auxiliary correction methods. As it was mentioned above, dolphin therapy allows to achieve the most significant positive changes in the psycho-emotional state of a child with autistic abnormalities.

There are two types of interaction between patients and animals: 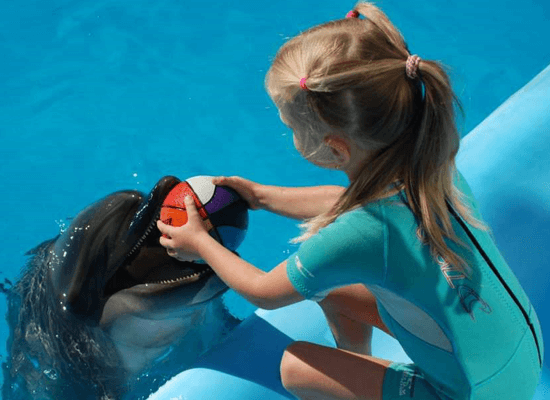 As studies show, on encephalograms of patients after sessions of dolphin therapy, there is synchronization of activity of both hemispheres of the brain, which, in the final result, contributes to increased production of endorphins. They play a significant role in stabilizing the processes associated with memory, training, sleep and have an analgesic and soothing effect. Communication and a kind of “friendship” with dolphins helps children with Asperger's syndrome to overcome difficulties in communicating with others, improves the psycho-emotional state and general tone of the body. As a result of “dolphin treatment”, the child quickly and easily adapts in the society, almost without experiencing fear and discomfort.

In the network of Nemo dolphinariums, classes are conducted by qualified specialists with extensive experience in working with special children. This allows to find the right approach to small patients and develop the most effective and comfortable for the children dolphin therapy.